I've been trying to introduce Chloe to a variety of fruits and vegetables, in both baby food form and the real thing. I really don't want her to be as Food Fussy as I am. It's really hard to cook for!

She's done very well so far, with the exception of baby food peas, and I can't blame her. They smell worse than the real thing. I was trying to feed her peas on a night we got McDonald's for dinner. She actually threw up the peas, and I felt bad that we were getting junk food and she had to eat mashed peas, so I gave her applesauce or something instead.

The other day I gave her a piece of real strawberry. She scrunched up her face, and I said I understood, they can be very tart. Even I like a bit of sugar sprinkled on mine, which kind of negates the fact that I'm eating fruit, but I guess it's better than a handful of Oreos. So I didn't force the strawberry.

I asked Bryan to pick up some of the baby food Puffs for her. It's like Cheerios but they dissolve instantly so there's less risk of choking. He picked out the strawberry and banana flavor. Sounds good! I gave her one puff in the morning and she spit it out. No big deal. In the afternoon, I tried again. She spit it out instantly. I tried to put it back in her mouth and she pinched her lips shut. I tried one more time and she pinched her lips and made a "raspberry" sound. Pffft! Chloe does not like strawberries!
Posted by Candace- Bryan at 9:50 AM 4 comments:

It's time you got to know the true nature of your Mom. I'm a slacker. It's only because of the thrill of finally having you here and the newness of you that I've been pretty "with-it" at taking your monthly picture. It's also due in large part to your Aunt Malissa. Here is your "6 month old" picture. You are acutally 6 months, 3 weeks, and 2 days old. So technically it's 6 months, but just barely. I guess it's not too bad. Ask your Aunt Cathie some time about having baby pictures. 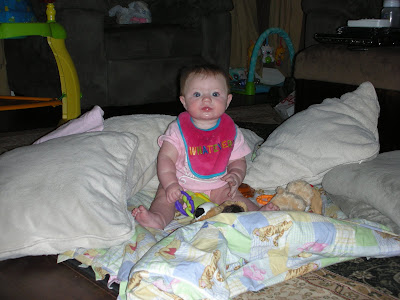 Oh, yes. You sit up now. I'd like to point out the fortress of pillows set up for your protection. Just because I don't take pictures on time doesn't mean I don't love you. It means this was May, and Mama is a teacher. Not good timing. 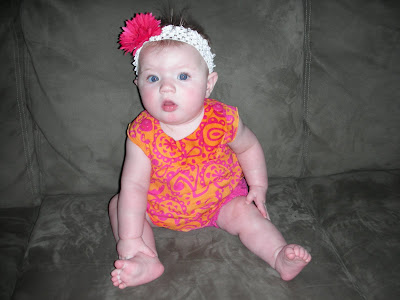 We are so happy for you, achieving your life-long dream of being able to sit upright all by yourself. You've been trying to do it yourself and insisting that we hold you sitting up since you were born. Really, even in the hospital you were trying. Congratulations! 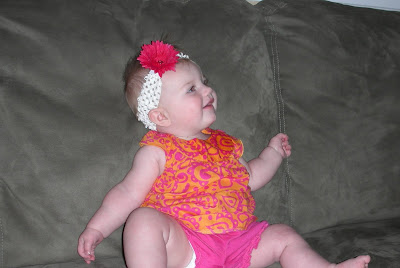 Here you are, laughing at something silly Daddy is doing. He makes you laugh all the time. You have a very sweet little squeal that you do just for him. 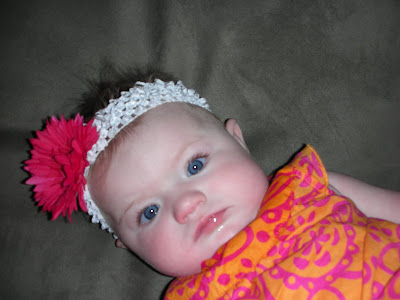 And here is your close-up. Not a fan of the flash on the camera today. But cute as ever! Thanks, Kimmy, for the very cute outfit!
Posted by Candace- Bryan at 9:05 PM 6 comments:

Well, really she's older now, but these are her 5 month old pictures, taken by her talented Aunt Malissa. Thank you, Malissa, for capturing her cuteness! 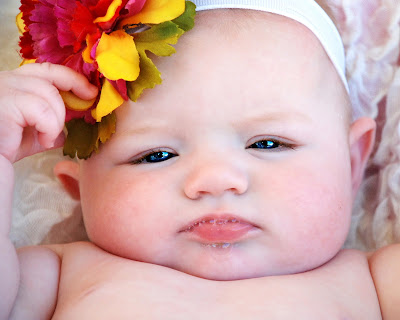 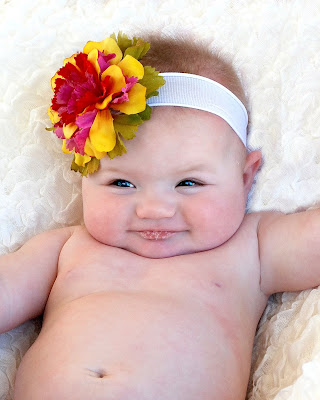 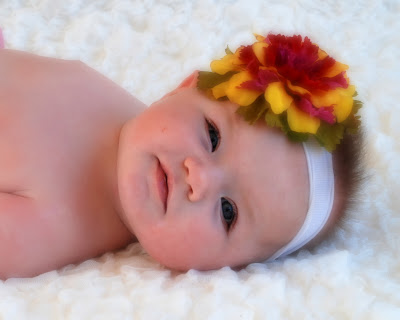 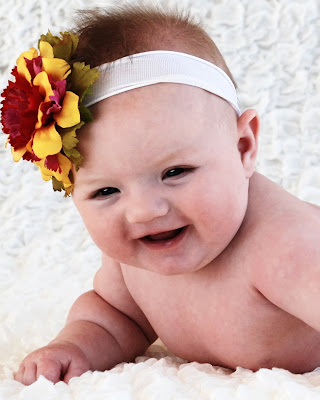 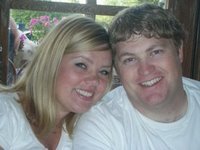 Candace- Bryan
Candace and Bryan met in September 2006, got engaged in November 2006, married in February 2007, and sealed in June 2009. Chloe joined the family in November 2009. To contact us you can email us at brycan@gmail.com

"For Once In My Life" by Ronald Miller